Black tea is produced from the same plant as green tea. There are many varieties of black tea. Some are harvested during spring or summer, some during autumn or winter. Some are processed differently than others. Some are more expensive than others. And some are better than others.

Black tea is fully oxidized. Oxidization changes the leaf color, flavour, and composition. The more oxidized the tea is, the darker the colour it will become. Tea is categorized into two groups: CTC (crush tear curl) and orthodox. CTCs have very small crushed leaves and orthodox have bigger leaves that may be broken.

How to Brew perfect Cup of Tea?

Brewing tea is a popular way to make a cup of tea. The key to brewing the perfect cup of tea is to use the right amount of water and the right temperature.

Black teas come from different places around the world. Some of them are very popular, while others are less known. The most popular and famous black teas come from India, Sri Lanka and China. However, many other countries are making black tea, including Australia, England and USA. African black teas with their strong and bold flavor are highly popular too.

Assam tea is probably the worlds most famous tea made from the assamica plant. There are thousands and thousands of assam teas, each having a slightly different flavor profile. Most of them are robust, full bodied and malt. Assam tea is great for making milky tea. It’s easy to brew and always go well with sugar and milk.

Assam tea is rich and flavorful. It is very popular among people who drink it black or with milk. It is also used to make milky tea.

How to Brew Assam Tea?

Brewing the perfect cup of Assam tea is quite simple if you follow these steps:

Which is the best Assam tea brand? 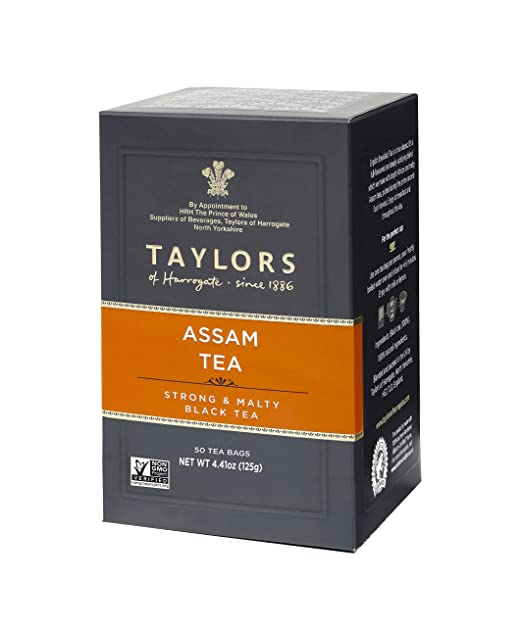 Does Assam Tea have caffeine?

A cup of Assam tea contains around 60-100mg of caffeine. This number doesn’t vary much as the time you brew your tea increases. Coffee however, contains more than 150mg per cup.

Orange pekoe is a type of tea made from the leaves of the Camellia sinensis plant. It is also known as Ceylon Black Tea or Assam Black Tea. This tea is often brewed with milk and sugar. It is very popular among people who enjoy drinking tea.

Why is tea called Orange Pekoe?

The name “pekoe” comes from the Chinese word “bai hao”, which means “white hair”. This refers to the white down on the leaf that was left on during processing.

Caffeine is a stimulant that can cause headaches and nervousness. Orange pekoe is a type of tea that contains about thirty-four milligrams of caffeine per six cups of tea. Black tea does not contain any caffeine.

India is one of the biggest and important tea producers in the world. Although tea production is not as India produces most of the world’s tea. Tea production was started by Indians more than 1000 years ago. Most famous teas come from India. Teas from other countries are often blended with Indian ones.

Does Indian tea have a lot of caffeine?

Indian Black teas has less caffeine than coffee, but still packs a punch. A cup of Indian Black teas contains about 25 to 55 mg of caffeine. That’s about half as much as an average cup of coffee.

Darjeeling tea is a type of tea grown in Darjeelin India. It tastes like a light muscatel flavored tea. It can be harvested at any time of the year, but it is most often picked during the first flush (spring) and second flush (autumn).

How to Make the Perfect Cup of Darjeeling Tea

The perfect cup of Darjeeling tea is a delicate balance of flavor and aroma. It is a blend of black tea, green tea, and oolong tea. The best way to make this type of tea is to use boiling water that has been brought to a rolling boil.

Darjeeling Tea have a lot of caffeine?

China produces some of the best black tea in the world. Tea is produced by many different countries around the world. Some of these countries produce black tea, while others produce green or white tea. Black tea is made from the same plant as green tea, but it is processed differently.

Lapsang Souchong is a special kind of black tea from the Fujian Province. It is made by smoking over pine logs. It is perfect for afternoon tea time and goes well with desserts.

Lapsang Souchong tea have a lot of caffeine?

Qimen tea originates from Anhui province, and Keemun tea was once an important ingredient in English breakfast tea. Nowadays, Qimen tea is usually enjoyed on its own.

Keemun tea have a lot of caffeine?

Dian Hong black tea is an ancient type of tea from China. It is made from Assamica tea plants. These plants grow in the mountains of Yunnan Province. The tea is dark brown in color and has a strong aroma. It tastes sweet and earthy with hints of honey.

Dian hong tea have a lot of caffeine?

The caffeine content in dian hong tea varies depending on how it is brewed and what kind of leaves are used to make it. For example, if you brew dian hong with boiling water for 3 minutes, then it will have more caffeine than if you brew it with cold water for 10 minutes.

Sri Lankan tea is a light-colored tea that tastes more bitter than other types of tea. It is also known as Ceylon tea.
It comes from the island of Sri Lanka. It is grown on different altitudes and has a lighter orange color. It has some bitterness too.

Sri Lankan black teas have a lot of caffeine?

The Sri Lankan black tea is made from the leaves of the Camellia sinensis plant. It is a dark-colored tea that has a lot of caffeine.

Coconut black tea is a type of tea that is made from coconut, and was first introduced by David Suzuki Foundation’s Green Cup program in Canada. Cinnamon, cardamom, cloves, ginger, mint, nutmeg, peppermint, rosemarie, sage, and thyme are some of the spices used in this type of tea. Vanilla bean and ylang-ylng are also added to make this type of tea more flavorful.

Chai masala is an Indian milktea, made with Assam Black Tea Leaves, Cardamom, Ginger, Cinnamon and Other Spices. This tea is very comforting, since it contains black tea, ginger, cinnamon and milk.

Masala Chai have a lot of caffeine?

The amount of spices used also affects the caffeine content as they contain varying amounts of caffeine themselves.

English Breakfast tea is a blend of different types of black teas that brew together to make a strong, full-body cup with slightly malty taste. It contains Assams as well as other types of teas such as Darjeeling.

English Breakfast have a lot of caffeine?

English Breakfast tea contains more caffeine than other types of tea, and this can have positive and negative effects on your health.

Earl grey is a type of black tea made by steeping the dried leaves of the Camellia sinensis plant in hot water. It is often flavored with bergamot essential oils. It is an excellent choice for tea beginners because it is easy to make and tastes great.

Earl Grey have a lot of caffeine?

No. Earl Grey tea does not contain caffeine.

Russian Caravan is a popular black tea blended with different teas. It’s often light and fruity, and sometimes has a smoky taste.

Russian Caravan have a lot of caffeine?

The Russian Caravan has a lot of caffeine. The caffeine content in a pack of this herbal tea is almost the same as in an average cup of coffee.

Lychee black tea have a lot of caffeine?

Lychee black tea can have a small amount of caffeine due to the fermentation process.

Bubble tea is a Taiwanese specialty drink made by suspending tapioca pearls in a clear liquid base. Tapioca pearls are usually sweetened with sugar syrup, condensed milk or evaporated milk. Fruit juice may also be added to make the drink sweeter.

Malaysian black teas are very popular because of their delicious flavors. Malay people drink them as a refreshing drink during summer time. In Malaysia it’s often served in small cups called “teah tarik” or “tetek”. Teh tarik can be drunk hot or cold.

A Kenyan is a mixture of tea leaves that are carefully selected by hand. Their flavors vary depending on how long they were left to dry or ferment. Kenyans are usually served after being steeped in hot water.

Kenya’s most famous variety is called “Kikuyu” which means “the people”. Kikuyus were originally herdsmen who lived in the area near Lake Victoria where they cultivated the coffee bean for export. They later become farmers when coffee was introduced as a cash crop. Many Kenyans work abroad, or own small businesses.

Dian Hong Cha is a type of tea that originated in Yunnan province in China. It is also called Yunnan Red Tea. It is made by fermenting the leaves of the Camellia sinensis plant for several months. After this process, the leaves are dried in sunlight to create its distinctive reddish color. It has an earthier taste than Pu’erh teas.

Rooibos is an African herb that produces a red-colored beverage. This plant grows up to two meters tall and produces large amounts of sweet tasting honey colored liquid. After processing, this liquid becomes very dark brown in color and tastes similar to black tea.

Caffeine in a Type Tea

This website uses cookies to improve your experience. We'll assume you're ok with this, but you can opt-out if you wish. Accept Read More